Unfortunately, our group did not communicate through 0ut the project, despite our efforts to contact them. This meant that myself and Emma (a member of our original group) took it upon ourselves to do the project without the rest of the group.

We began by looking for books on portrait photographers, looking for something similar to the images we had previously looked at. I found an image similar to this, by Richard Avedon. The window was almost a filter, it separated the viewer from the model. 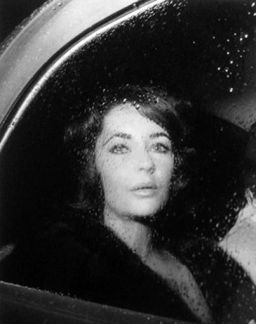 We then began looking for portraits of a person which are more similar to this. We found that the images we liked all tended to have a depressing, sombre feel. Sombre was a word which was frequently repeated when we talked about our work, so we felt it was appropriate to name the show Sombre.

We chose to split the images into two sections; in section one it felt as if we were looking in at the models whereas section two it was as if they were looking out the window. We printed our images on an inkjet printer on lustre paper as this was high quality and we felt that the images deserved this good quality. We placed the name of the photographer, image and date below the image in the left corner.

The writing explaining our exhibition is in the middle of the piece because we wanted it to be noticed as it explains why we put the images together and also splits the images up so that there is not too much to look at. The images were all placed at an average eyeline height as we found it looked more uniform and there was no need for them to be at different heights.

Sombre is an exhibition based loosely around the idea of an isolated and lonely yet very narrative portrait. Photographers Jeff Wall, Hannah Starkey, Tom Hunter and Philip Lorca-diCorcia all use narratives in their portraits to portray a lonely story.

Throughout the show each selected photograph depicts an isolated person or couple with very subtle lighting in a very secluded settings, either their ‘own’ home or somewhere with limited access like a female bathroom. As a reader of the show, Sombre wants you to feel as though you are looking in on each situation and this is helped by the camera angle in each photograph as each and every one does not feel invasive, more like it is peering onto the situation through a door or window, yet it still feels as if you were there.

Each of the chosen photographers are well known for their staged portraits which is something Sombre was looking for as it is about how someone who is just acting can get across to the reader those feelings of isolation and the sombre mood, whilst making it feel very realistic for each photograph.

First, photographer Jeff Wall, his portrait ‘Picture for Women 1979’ gives off the impression of isolation in the woman even though she is accompanied. The male character makes her seem as though she is being threatened, her facial expression tells us something is not right yet we are left guessing.

Second, photographer Philip Lorca-diCorcia and ‘Mario, 1978’. The lone figure suggests isolation along with the low lighting.

Third, Tom Hunter and his photograph ‘Woman Reading Possession Order’. Hunter used Baroque style paintings to influence a lot of his photographs using the narratives behind them to almost recreate them to move them into a more modern era. For this photograph, Hunter used Vermeer’s painting ‘Girl Reading Letter’ to stage his portrait.

Finally, Hannah Starkey, who we have selected three images from her Untitled works. Each of these photographs is staged and all have a very low feeling coming from them. 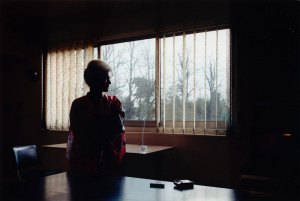 Unfortunately, we did not read the brief correctly, as the images should have been from the previous 10 years and we did not do this. However, our tutors felt that the images did fit together well and were given the quality they deserved with the printing.

Our tutors thought that it would have been a better idea to put the numbers below the image and perhaps have a corresponding list separately, further below the images. I have to agree that the way we presented it with the details was perhaps not very professional.

I have a much better understanding of how to curate a show now and enjoyed the challenge of creating a show from scratch.